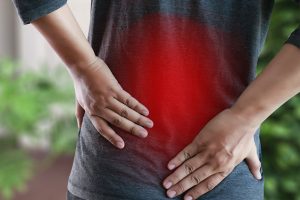 The lumbar spine is comprised of 5 vertebrae. In between each of these bones lies a disc. The disc is a shock absorbing structure comprised of an outer annulus section and an inner nucleus portion. The annulus consists of several layers of multi-directional, fibrocartilaginous fibres, densely packed into rings to create a wall around the nucleus. The nucleus is a jelly-like substance that moves within the annulus, adjusting to the pressures placed on your spine.

Due to the structure of the spine and the way we move, as well as the postures we adopt, lumbar disc injury is a common condition. Injury to the disc will fall into one of the three following categories of increasing severity.

Annular Strain
The back portion of the annulus becomes inflamed due to sustained or repetitive bending of the lower back. It can also occur as the result of a sudden movement or unexpected force applied to the lower back, such as catching a falling object.

Disc Bulge / Protrusion
This tends to occur gradually, over a period of time, although onset of symptoms may be quite sudden. With this injury, as a result of repetitive stress on the back of the annulus, it becomes stretched and begins to bulge, generally backwards towards the nerves and spinal cord. This is commonly referred to as a ‘slipped disc’.

Disc Herniation
This generally occurs in a chronically bulged disc, where the layers of the annulus rupture and the jelly like nucleus can leak out into the space surrounding the spinal cord and nerves.

Symptoms of a Disc Injury

Management
The disc is usually irritated by flexion activity such as sitting and bending forward. Limiting time spent in these positions is crucial to allowing the disc to settle. Heat and analgesia can be quite useful in settling muscle spasm and inflammation of the disc and surrounding nerves.

Physiotherapy will involve gentle techniques to decrease muscle spasm and restore normal spinal movement. Taping the back can be extremely useful in offloading the disc and settling muscle spasm. You may be prescribed extension exercises to assist the healing process. It is important to identify factors contributing to the injury, such as postural issues or muscle weakness and imbalance. It is essential to attempt to prevent a re-occurrence of the injury in order to stop the progression of the disc thru the three stages of injury.